The EU must swiftly legislate to further protect the rights of activists, journalists and politicians following the Pegasus spyware scandal, the bloc’s justice commissioner has told the European parliament.

The Guardian view on Brexit diplomacy: thaw, not Frost | Editorial 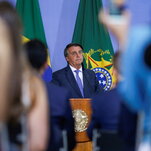