Taiwanese fighter jets landed on a makeshift runway on a road on Wednesday as annual drills reached their peak, practising skills that would be needed in the event of an attack by China.

In exercises overseen by President Tsai Ing-wen, three aircraft – an F-16, French-made Mirage and a Ching-kuo Indigenous Defence Fighter plus an E-2 Hawk-Eye early warning aircraft – landed in rural southern Pingtung county on a road specially designed to be straight and flat for rapid conversion into a runway. 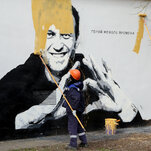