Plus: record scorers at more than one club, players in all four English divisions in one season and more

“What’s the longest time a player has had sole possession of the ball before scoring?” asks James Dart. “Roberto Baggio v Napoli is just under 11 seconds, Maradona v England 11 and a bit, with Scott Sinclair v Barnet around the same. Assume that can be bettered?”

Let’s start with Aston Villa and the wondrous dribble and chip from the late, great Dalian Atkinson. Finch emailed in measuring it at 12 seconds from the moment he picks up possession to the time at which the ball crosses the line. Our stopwatch shows the same. 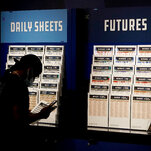