The BBC chair has defended its recruitment process after a board member with government links reportedly tried to block an appointment, while the corporation’s director general emphasised that “impartiality is sacrosanct”.

The BBC chair, Richard Sharp, insisted it was right for concerns to be raised after Robbie Gibb, a BBC board member who was head of Downing Street communications under Theresa May, reportedly warned against appointing Jess Brammar as the new head of the BBC’s news channels.

Afghanistan: 'I feel betrayed. We feel left behind' 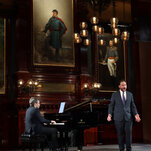