Bruce potentially set for his final game at Newcastle, Ranieri begins tough spell at Watford and Guardiola has Sterling decision to make

It feels trivial discussing mere football matters when set against the ethical concerns arising from Newcastle’s Saudi takeover, but it feels as if whatever happens on the pitch against Tottenham will accelerate Steve Bruce’s departure. He is unlikely to get much credit if his side record a first league win of the season; instead it will only heighten the sense of “new broom” momentum that would require a bigger-name manager as soon as possible, while defeat would only serve to demonstrate the immediate need for change. It helps Bruce that Newcastle’s first opponents of the new era are a side who have been desperately unconvincing for at least a month, and who could be there for the taking if the hosts get on the front foot early. Defeat for Spurs would intensify the early pressure on Bruce’s counterpart, Nuno Espírito Santo, and heighten the focus on the various aspects of Tottenham’s game that aren’t functioning properly, particularly if Harry Kane remains goalless. It will be a morally queasy occasion but the party atmosphere might just work in Newcastle’s favour, for all the good it will do Bruce. TD 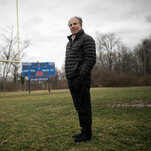 Will Injured Kids Sue the Catholic Church Over Youth Football? 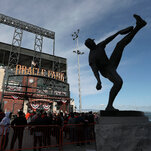