Another UK energy supplier has gone bust, following the collapse of Bulb earlier this week, bringing the number of households affected by a supplier failure closer to the 4m mark.

Orbit Energy confirmed it was the latest casualty of the energy market crisis, bringing the total number of suppliers that have failed to 24 in fewer than 12 weeks, as companies unable to withstand higher wholesale prices go under. 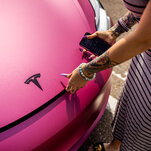 The Car Key of the Future (Is Still in Your Pocket)