Liverpool city council is “emerging from a difficult, somewhat toxic period”, according to the first report from government-appointed commissioners sent in following the former mayor’s arrest and allegations of corruption.

The report, published after the commissioners’ first three months, also warned that the desire for quick change has led to a “frenetic rather than purposeful and targeted approach”.

Channel tragedy: ‘Smugglers tell their clients it’s just a lake – but it’s not’ 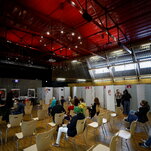