One of northern England's best-known restaurants has been engulfed in flames after its thatched roof caught fire. More than 40 firefighters were called to the Michelin-starred Star Inn at Harome, North Yorkshire. 'It's been a long night so far ... I'm afraid we won't be open for a while as we are reduced to ashes,' said chef Andrew Pern, who tweeted footage of the fire. The 14th-century inn has regularly been cited as one of the best in the UK since the arrival of Pern 25 years ago 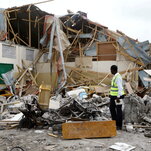