It’s too soon to end lockdown. But give us the best route to early freedom – Covid passports | Will Hutton

If initial caution is necessary, we also need to forget the spectre of Big Brother

Prepare for a disappointment. No prime minister who is committed to an irreversible departure from lockdown and who has told world leaders that the same mistakes must not be repeated can now end it on 21 June. A delay is certain, given the dramatically worrying figures released by Public Health England on Friday about the growth and deadliness of the Delta coronavirus variant, first identified in India.

Hopes that large gatherings such as weddings might be given the go-ahead if everyone attending is tested, even while the rule of six, mask wearing, working from home and social distancing rules remain, are looking wobbly. The US Food and Drug Administration’s scathing criticism on Thursday about the effectiveness of Innova’s lateral flow tests, widely used in Britain by NHS Test and Trace in a £3bn contract as part of Operation Moonshot, has forced a review that may lead to their suspension. Spending billions on a testing process only supported by scant and partial data was a risk too far.

For most of history, humans have viewed wild places as threats to their existence. The wilderness is a godless domain, “a thirsty and waterless land, with its venomous snakes and scorpions”, says the Old Testament.

Only recently have we realised we had the story backwards. It is nature that has been menaced by humans and the consequences now threaten to overwhelm us. “Almost no rock, leaf, or cubic foot of air on Earth has now escaped our clumsy signature,” says US essayist Nathaniel Rich. “The natural world is gone.” 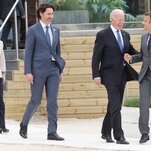 ‘We took up skydiving to escape’: Britain’s lockdown thrill-seekers

Maddie Woodward and Olly Rodgers were supposed to be getting married this year. But when the wedding could not happen as they planned, because of government restrictions, they decided to do a skydive instead.

Skydiving centres have reported a surge in bookings as people grow desperate for post-lockdown excitement. Tony Butler, chief operating officer at British Skydiving, said the combination of good weather and the long time spent closed meant that centres were very busy, which was helpful as “they, like many businesses, would have had little income in the last year”.

Children and hospital staff killed in attack on northern city Afrin, which is held by Turkish-backed rebels

Shelling of the rebel-held city of Afrin in northern Syria killed at least 18 people, many of them when a hospital was hit, a war monitor said.

The London-based Syrian Observatory for Human Rights said a doctor, three hospital staff, two women and two children died at al-Shifaa hospital, which is held by Turkish-backed rebels, on Saturday.

Joe Biden agreed on Sunday with Vladimir Putin’s latest assessment that US-Russia relations are at their lowest point in years but insisted that while the two countries may have fundamental disagreements, “we are not looking for conflict”.

The US president also addressed the issues of autocracy versus democracy, the climate crisis, future pandemics and problems caused by his White House predecessor Donald Trump, while holding a press conference to mark the end of the G7 summit in the English county of Cornwall.